This is part 5 in the series Migrating a Monolithic SaaS App to Serverless — A Decision Journal.

In order to make sure that each new route I migrate over from the legacy Express.js API to Lambda is thoroughly tested before releasing to production, I have started to put a CICD process in place.

My main goals for the CICD process are:

I have decided to use AWS CodePipeline and CodeBuild to create the pipelines as they’re serverless and have IAM support built-in that I can use to securely deploy to prod servers. CodePipeline acts as the orchestrator whereas CodeBuild acts as the task runner. Each stage in the CodePipeline pipeline consists of one or more actions which call out to a CodeBuild project that contains the actual commands to create a release package, run tests, do deployment, etc.

For the first version of my CICD process, I will be deploying a single service ac-rest-api (which currently only contains a single test Lambda function + API GW route). This pipeline will work as follows: 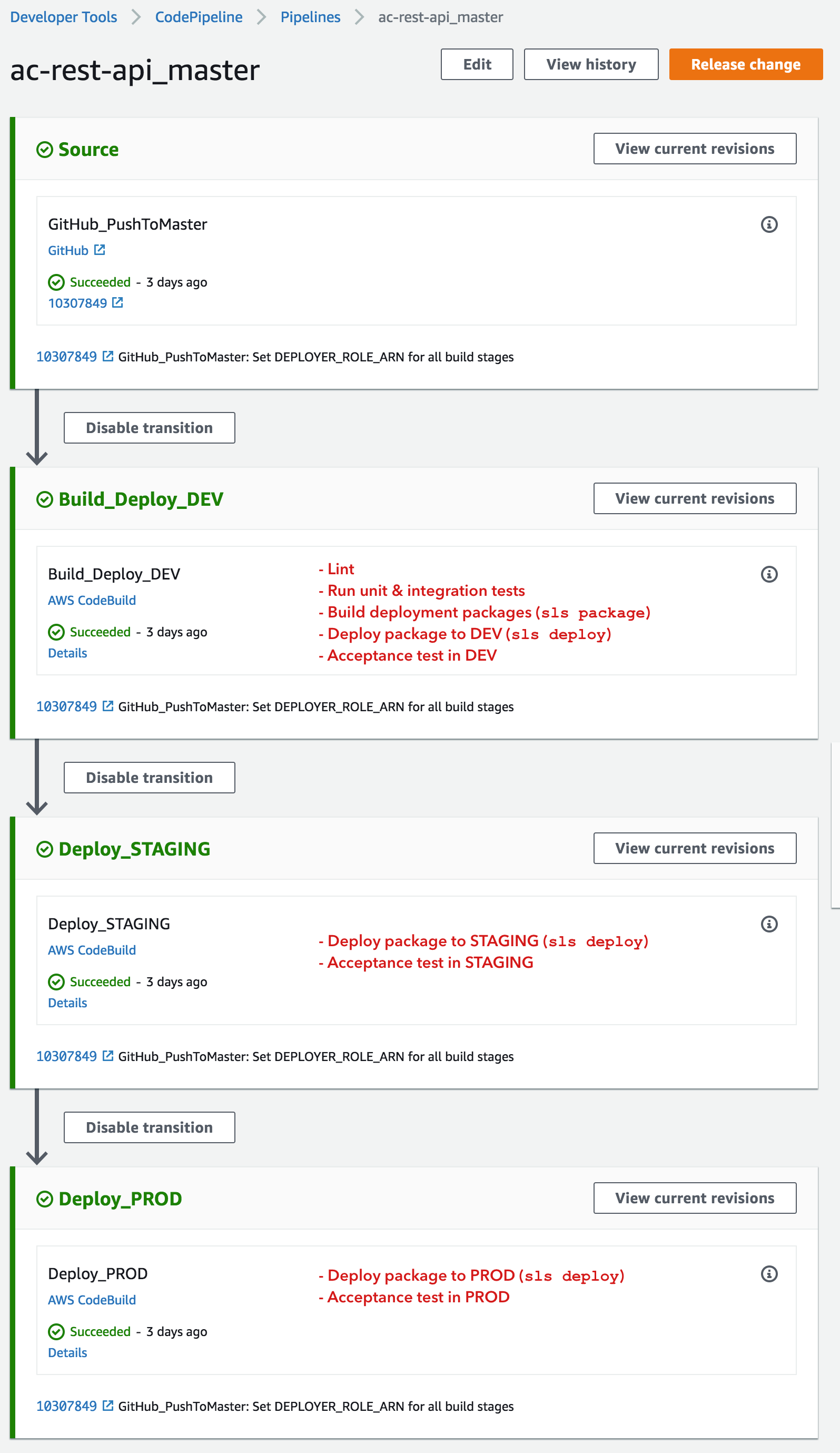 As with most AWS services, it’s easy to find tutorials on how to create a CodePipeline pipeline using the AWS Console, but difficult to find detailed infrastructure-as-code examples. CodeBuild fairs better in this regard as the docs generally seem to recommend using a buildspec.yml file in your repo to specify the build commands.

Since I will be creating several pipelines for each microservice I’ve identified as I go through the migration process, I want something I can easily reuse.

I considered these options for defining my pipelines:

I’m relatively proficient with CloudFormation but I find its dev experience very frustrating and in the past have burned days getting complex CloudFormation stacks up and running. My main gripes with it are:

Given this, I decided to proceed with using the CDK which (in theory) should help mitigate all 3 of these complaints.

The CDK provides a CLI that you use to deploy an “app”. An app in this context is effectively a resource tree that you compose using an object-oriented programming model, where each node in the tree is called a “construct”. The CDK provides ready-made constructs for all the main AWS resources and also allows (and encourages) you to write your own. A CDK app contains at least one CloudFormation stack construct, which it uses to instigate the deployment under the hood. So you still get the automatic rollback benefit that CloudFormation gives you.

For more detailed background on what the CDK is and how you can install it and bootstrap your own app, I’d recommended starting here.

I also decided to try out Typescript (instead of plain Javascript) as the CDK was written in Typescript and the strong typing seems to be a good fit for infrastructure resources with complex sets of attributes.

I started by creating a custom top-level construct called ServiceCicdPipelines which acts as a container for all the pipelines for each service I’ll be creating and any supplementary resources. I’ve included all the source code in this gist, but the main elements of it are as follows:

The custom ServicePipeline construct is where most of the logic lies. It takes a ServiceDefinition object as a parameter, which looks like this:

This object is where all the unique attributes of the service being deployed are defined. At the moment, I don’t have many options in here but I expect to add to this over time.

The ServicePipeline construct is also where each stage of the pipeline is defined:

I created all these CDK custom constructs within a shared autochart-infrastructure repo which I use to define shared, cross-cutting infrastructure resources that are used by multiple services. The buildspec files that I cover below live in the same repository as their service (which is how it should be). I’m not totally happy with having the pipeline definition and the build scripts in separate repos and I will probably look at a way of moving my reusable CDK constructs into a shared library and have the source for the CDK apps defined in the service-specific repos while referencing this library.

In the above pipeline definition code, you may have noticed that each deployment stage has its own buildspec file (using the naming convention buildspec.<stage>.yml). I want to minimise the amount of logic within the pipeline itself and keep it solely responsible for orchestration. All the logic will live in the build scripts.

Building and deploying to DEV stage

As soon as a push occurs to the master branch in Github, the next pipeline step is to run tests, package and deploy to the DEV stage. This is shown below:

There are a few things to note here:

The main thing to note in the above script is the assume_role function which gets called before the deploy command. In order for CodeBuild to deploy to a different AWS account, the sls deploy command of the serverless framework needs to be running as a role defined in the target account. To do this, the Codebuild IAM role (which is running in the DEV account) needs to assume this role. I’m currently doing this by invoking the aws sts assume-role command of the AWS CLI to get temporary credentials for this deployment role. However, this seems messy, so if anyone knows a cleaner way of doing this, I’d love to hear it.

Deploying to Staging and Production

The script for deploying and running tests against staging is similar to the dev script, but simpler:

The key things to note here are:

The buildspec.prod.yml file is pretty much the same as the staging one, except it references the production IAM role and artefact source directory.

This was probably the hardest part of the whole process. As I mentioned above, the deployment script assumes a pre-existing deployer-role IAM role that exists in the AWS account of the stage being deployed to. To set up these roles, I again used the CDK to define a custom construct CrossAccountDeploymentRole as follows:

The props object that is passed to the constructor contains the specific requirements of the service. The main thing here is the deployPermissions which is a set of IAM policy statements to enable the user running the Serverless framework’s sis deploy command to deploy all the necessary resources (Cloudformation stacks, Lambda functions, etc).

An important thing to note is that this set of permissions is different from the runtime permissions your serverless service needs to execute. Working out what deploy-time IAM permissions a service needs is a well-known problem in the serverless space and one that I haven’t yet found a nice solution for. I initially started by giving my role admin access until I got the end-to-end pipeline working, and then worked backwards to add more granular permissions, but this involved a lot of trial and error.

For more information on how IAMs work with the Serverless framework, I’d recommend reading The ABCs of IAM: Managing permissions with Serverless.

A few tips for building and testing your own pipelines

Going forward, here are a few additions I’d like to make to my CICD process:

Next up in my migration plan is getting an auth mechanism built into API Gateway that new routes can use. That will be the first real production code being tested by my new CICD pipeline.