This article is part of a series on “Testing Serverless Applications” based on lessons I’m teaching in the Serverless Testing Workshop.

In the last article, we covered the three core goals driving why we write automated tests and the trade-offs that we need to make in order to reach satisfactory levels of confidence, maintainability and feedback loop speed.

You may have been left wondering “how do I get to a sufficient level of confidence?”. A typical answer to this could be along the lines of: “write a load of unit tests and aim for as close to 100% code coverage as possible”.

And while unit tests and automated code coverage measurement can be part of building up confidence in your serverless system, in my experience they are a small part.

In this article, I’ll argue that you should favour integration and end-to-end (E2E) tests for maximising the confidence delivered by your automated test suite.

What can go wrong?

Before deciding what tests to write for a given use case, we need to first understand our failure modes. A failure mode is a specific way in which a system-under-test can fail, and it can have any number of root causes. If we know what these modes are, then we can write tests to “cover” as many of the failure modes as is feasible.

Aside: There are many failure modes for which we shouldn’t write automated tests that run in pre-production environments as they’re too costly/difficult to simulate in a test. For these we can instead employ testing in production techniques to detect.

Let’s illustrate this with an example…

This pattern is by far the most common in serverless applications that I’ve built and involves a synchronous request-response cycle from API Gateway thru a single-purpose Lambda function thru DynamoDB and back again.

So what could go wrong here? What tests should we write? Let’s look at the deployment landscape for this use case to help answer these:

The light red boxes depict source areas made up of code or configuration that we (as the developer) write and which are then deployed to a target environment.

Each source area can be a cause of several failure modes. Let’s look through each in turn:

Covering these failure modes with tests

If you look through each failure listed above, very few of them can be covered by standard in-memory unit tests. They’re predominantly integration configuration concerns.

The diagram below shows the coverage scope and System-under-test (SUT) entrypoint for each of the three test granularities (unit, integration and E2E): 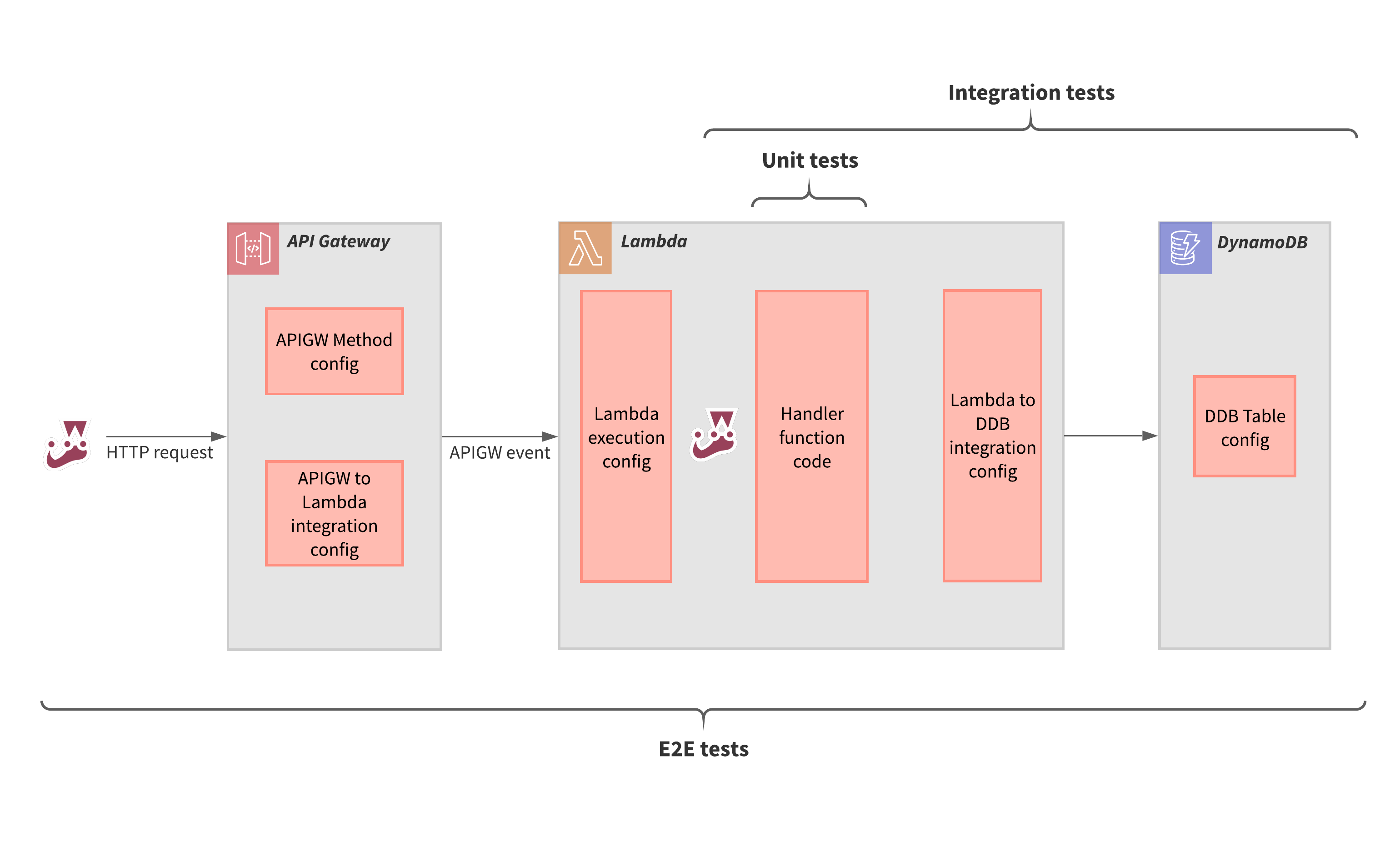 So then why not only write E2E tests? Let’s look at the key properties of each type of test for our example use case to see what they have to offer:

The key benefit that integration tests give over E2E tests is that they allow for much faster iterative development. Their deployment overhead is low (one-off provisioning of a DynamoDB table) whereas E2E tests require deploying the most frequently changing areas (the handler code) every time.

Aside: Given the similarity between the entrypoint input events to the E2E and integration tests (a HTTP request and an APIGatewayProxyEvent), it’s possible to get 2-for-1 when writing your test cases whereby a single test case can be run in one of two modes by switching an environment variable. I cover this technique in my workshop and I’ll try to write more on it soon.

We’ve looked at the Simple Web Service pattern here but I’ve found value in leading with integration and E2E tests for almost any serverless use case that involves the triggering of a single-purpose Lambda function that calls on to a single downstream AWS service, e.g. S3-> Lambda-> DynamoDB, or SNS -> Lambda -> SES.

You definitely still can write unit tests in addition to integration and E2E tests (and there are many valid reasons why you might still want to do so). But my point here is that you may not have to for many serverless use cases where business logic is often simple or non-existent.

Unit tests are no longer the significant drivers of confidence from your test suite that they once were in server-based monolithic apps. In serverless apps, integration and E2E tests are king.

If you’re interested in learning more about testing serverless apps, check out my 4-week Serverless Testing Workshop. The workshop is a mixture of self-paced video lessons alongside weekly live group sessions where you will join me and other engineers to discuss and work through different testing scenarios.