Arguably the main job of a software architect is drawing boundaries in the right places.

We love to discuss the why, when and how of splitting things up — monorepo vs multi-repos, single vs multi-table DynamoDB models, the pros and cons of Domain-Driven Design and fat vs single-purpose Lambda functions.

A case in point is this Twitter poll I ran last week about a particular hybrid style of serverless architecture that sparked a few interesting threads: 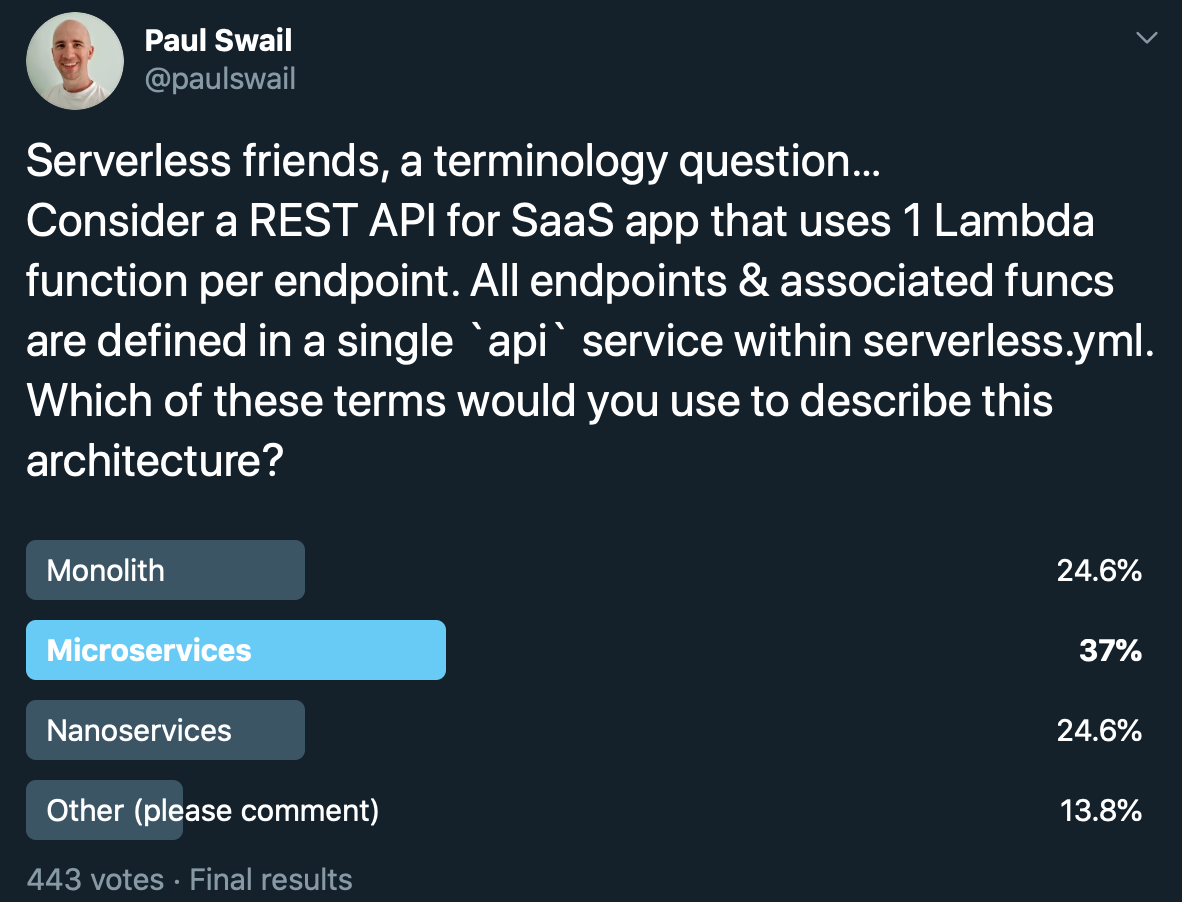 As you can see from the poll results, opinions were split. Here’s a selection of questions and observations from the replies:

Of course, being the internet there were a few snarky condemnations for not following their favoured dogma in its purest form.

While having a concise name to describe a high-level architectural pattern is nice, it’s not the most important thing. Building a system that’s valuable to its users and sustainable in the long term is.

To do so, you need a strong appreciation of the entire context in which the system will be built and operated. But there are so many complicating factors within this context that will influence any boundary-drawing decisions you make. Let’s look at several questions you’ll need to consider:

There are a lot of questions I haven’t stated and many questions will lead to further questions. And so on.

No two custom software development projects are the same, so why do many folks try to fit a system into their preferred strict architectural style? Which leads me to my main point…

Cherry-picking aspects of mono, micro and nano is a valid approach

In fact, this is my standard approach when starting a new greenfield project.

Neither monoliths nor microservices (nor nanoservices) have “won” the argument for the best architecture style to build production software systems. So being a dogmatic adherent to one over the others is doing a disservice to the rest of your project team.

While you will probably have a preference for one style, you don’t need to go all-in on it, especially at the start of a project. I’m sure the architect who starts out by creating separate Git repositories and CI/CD pipelines for every individual single-purpose Lambda function is a nice guy but I cannot envision any project in which this would ever make sense.

On the other hand, you could initially identify a few bounded contexts and keep them in their own separately deployable service but still store them all in a single monorepo. Or you might start with a single CI/CD pipeline that deploys all the services together but at a later stage you can work on giving each service their own pipeline.

These are perfectly good decisions provided they’re made with the understanding of the trade-offs in your own context.