A great benefit of building Lambda-based applications is that the security best practice of least privilege can be applied at a very granular level—the individual Lambda function. This is done by creating a separate IAM role for each function which grants the function just the permissions required to make the AWS API calls that it needs to perform its task and nothing more. If a single Lambda function is compromised, then the blast radius only goes as far as the very limited (often single) API calls that this function’s role has permissions to make. 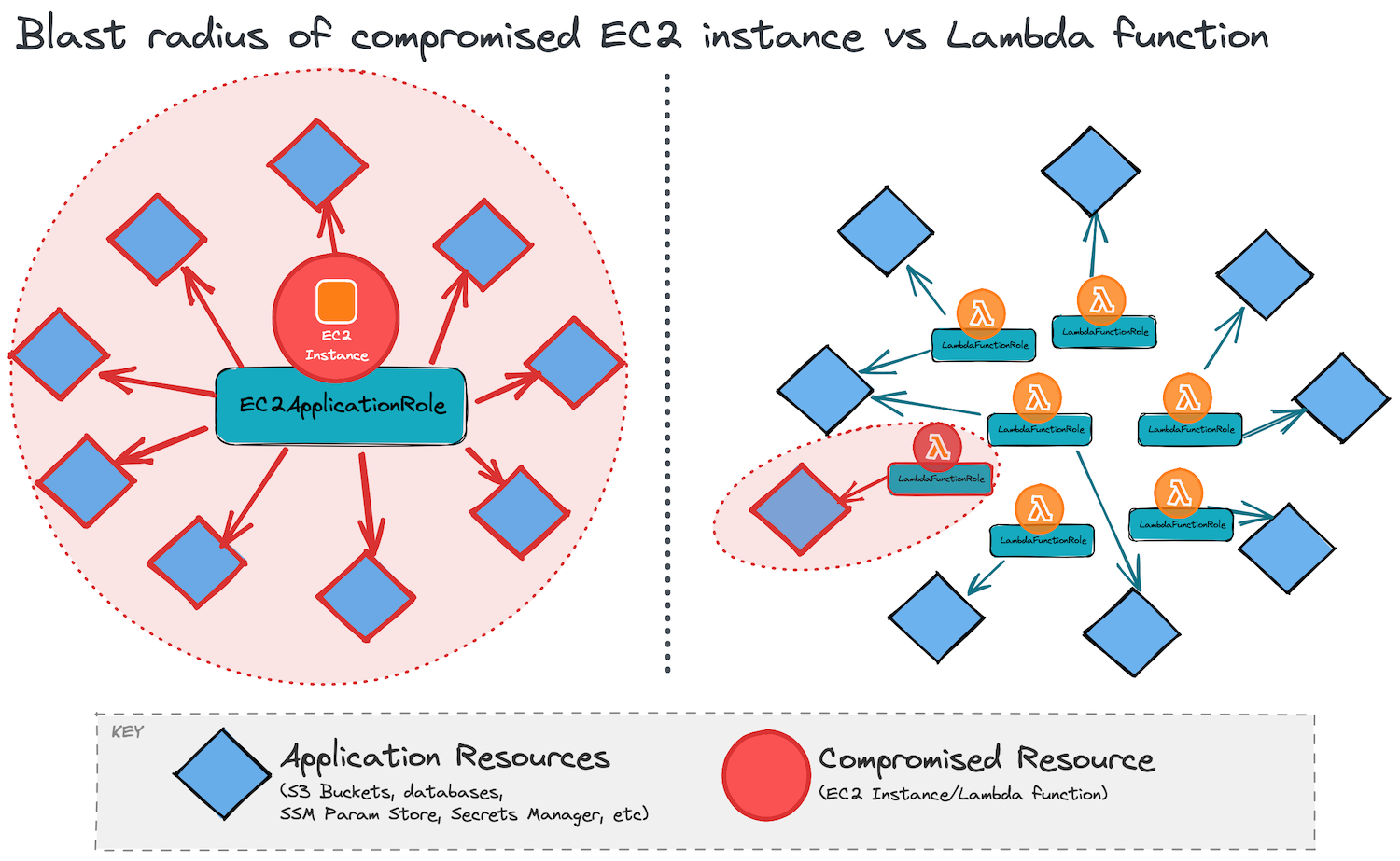 Serverless deployment frameworks encourage this best-practice by automatically generating IAM roles for each function defined in the file. AWS SAM enables this by default (see here) and the popular serverless-iam-roles-per-function plugin does this for the Serverless Framework. In both cases, the developer just needs to add a few lines to their YAML function definition with the IAM policy statements to be included in the function’s role.

Problems with this approach

While developer-specified per-function IAM roles are great, there are two problems with relying solely on them to secure your Lambda application.

Good developers care about the security of the features they’re building but they also care about shipping them on time. This will often involve trade-offs and IAM is notoriously difficult to get right. Finding the correct permissions required for a particular API call is not an easy task amongst the expansive AWS documentation and a time-pressured developer may be tempted to grant unnecessarily broad permissions in order to get something working.

Similarly, less experienced developers may stumble upon internet articles or Stack Overflow answers which suggest giving “Resource: *” permissions to get past a specific error and take this at face value, without realising the security impact of doing so.

Getting IAM right is hard and these are examples of unnecessary privilege escalation which can result in a security hole within your AWS account if left unbounded.

Some larger organisations with a dedicated in-house cloud platform/security/DevSecOps team—in particular those with limited experience of operating fully serverless, Lambda-based applications—have a general policy of not allowing application development teams to create their own IAM roles and users. Given problem 1, this stance is understandable as the platform team will be more skilled with IAM than the application development team and maintaining security is their highest priority. They are the gatekeepers of any IAM roles that get created and application teams need to submit requests for creation of roles through them. IAM roles for CI/CD deployment which the platform team typically install may not be given the permission to create IAM roles for the application.

However, the big problem with this stance is that it doesn’t scale well for a fast-moving serverless application development team. Having to go through a cross-team human review of a new IAM role every time a new single-purpose Lambda function is created (often several times a week) will get old very fast.

It is much less of an issue for traditional EC2-based application dev teams who generally only need one application role created at the outset of development and maybe the occasional statement addition every month or so.

A strict adherence to this policy by the platform team would require a single IAM role to be shared across all Lambda functions in order to allow development team to continue to move swiftly and independently. But then we have to compromise on security as we lose all the benefits of the small blast radius that Lambda gives us. We’re back to the EC2-sized blast radius. 🙁

Permissions boundary to the rescue

An IAM permissions boundary allows us to get the best of both worlds:

A definition from the AWS docs:

Once the ApplicationRuntimeBoundary managed policy is in place, there is one step remaining for the application team to complete. They need to update their deployment framework source code where their functions are defined to instruct the framework to attach this policy as a permission boundary to all IAM roles it creates for each function.

With AWS SAM, this can be achieved by setting the PermissionsBoundary attribute in the SAM template. See example here.

With the Serverless Framework, you can use the PermissionsBoundary attribute of the iam-roles-per-function plugin, like so:

The diagram below shows how a boundary permission prevents a Lambda function—whose IAM role policy has an extremely loose permission set granting it full access to SSM Parameter Store—from accessing any parameter keys that do not match the specified resource prefix path, and even then, it will still only have read access to them.

I can build you a secure, multi-account AWS org, with code structure, dev environments and delivery pipelines all pre-installed, allowing your team to focus on building features for your app.

Lambda-based cloud applications are by default more secure than traditional EC2-based workloads. But the security models of both architectures differ a fair bit and so both application developers and cloud ops engineers need to adapt their existing practices and policies to keep up. Developers need to learn how best to do least-privilege IAM and ops engineers learning about the security benefits that serverless apps enable.

Use of an IAM permissions boundary for Lambda functions is an example of a win-win for both parties. This tweet from Andy Carter illustrates the significant benefits to cross-team productivity he has experienced with allowing the application team to manage their own IAM roles: